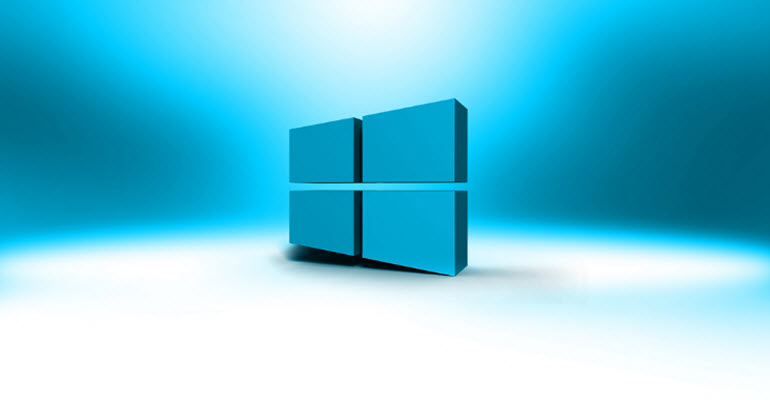 Keeping the Windows 7 architecture intact, Windows 8 introduced several changes that were unique to it. The interface was redesigned and based on the Metro design language; while optimizations were done for a touchscreen. Out of the many quirks that were fresh and new, the start menu design was of the more striking and visible ones.

Borrowing from the architecture of the start menu of the Windows phone, a ‘start screen’ was developed instead of a start menu. The changes have received a mixed response from users, but mostly negative due to the difficult learning curve it required. Users tend to prefer similar environments with software updates as so they don’t have to learn how to use it all over again.

When it comes to VPNs for Windows 8, many users have found it difficult to even find the settings menu. However, once you learn how to bring up the start menu for the control panel, the menus start becoming familiar again.

Again, Windows 8 is only frustrating because of the changes to menus and the interface. Considering that it was designed with touch screen technology in mind, it’s also anything but efficient. If you need to setup a VPN on Windows 8 with native Microsoft built-in protocols, this guide provides a step by step configuration overview.

PPTP or the protocol which “allows corporations to extend their corporate network through private ‘tunnels’ over the public Internet,” is built into Windows 8. It is one of the easier ways to set up a VPN connection on the modern operating system.

The first thing that you have to do is get to the Control Panel. You can do so through the Desktop screen or by pressing the Windows Key and x. If you do, a bar will appear on the left corner of your screen, which has the Control Panel icon. 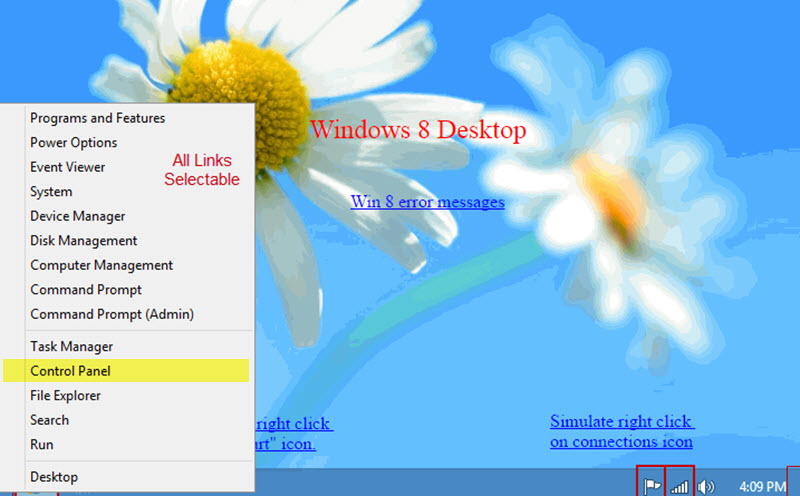 Under the ‘Network and Internet’ option, click on the ’View Network Status and Tasks’ option. 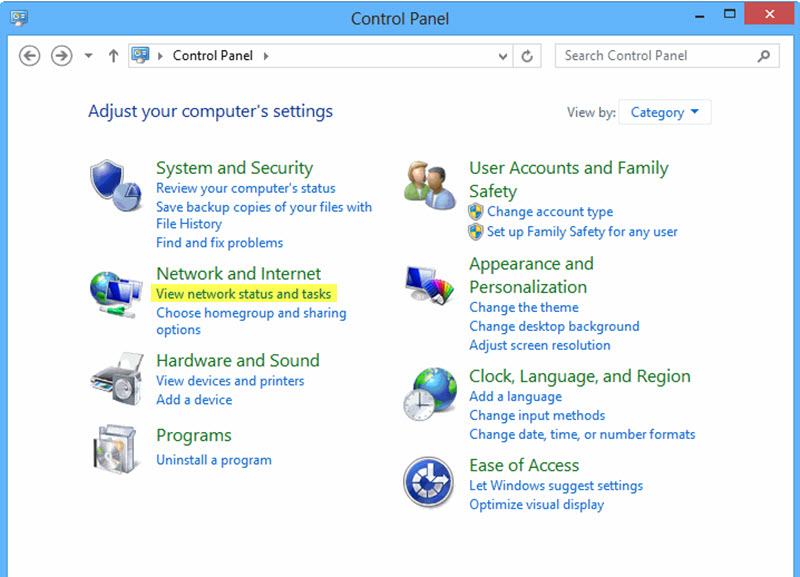 After you have done so, click on the ‘Setup a new connection or network’ option. A tab appear in front of you. 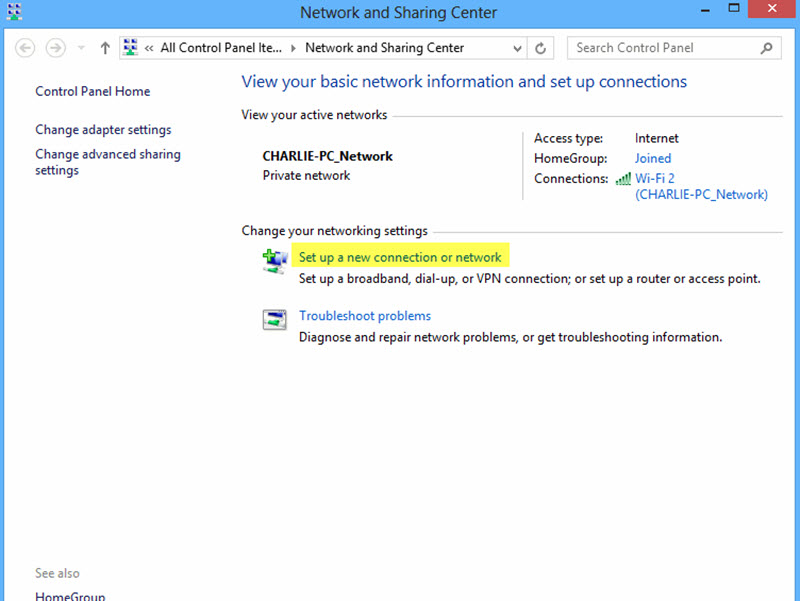 Out of the many options in front of you, choose ‘Connect to a workplace’ and then click ‘Next’. 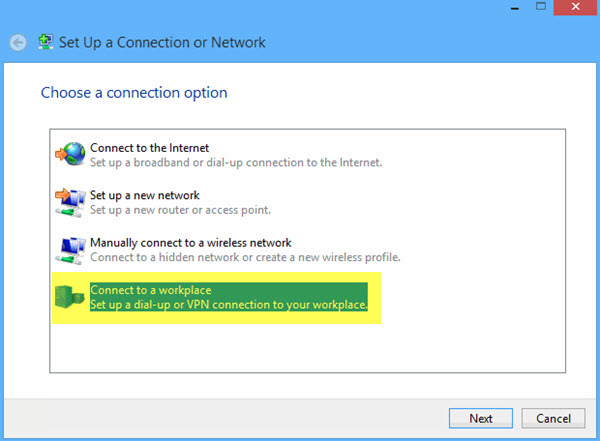 Continue by clicking on ‘Use my Internet connection (VPN)’.

You will be needed to type in your ‘Internet Address’ provided by the VPN provider, and also a ‘Destination Name’. Don’t forget to tick the ‘Remember my credentials’ box, and then click ‘Create.’ 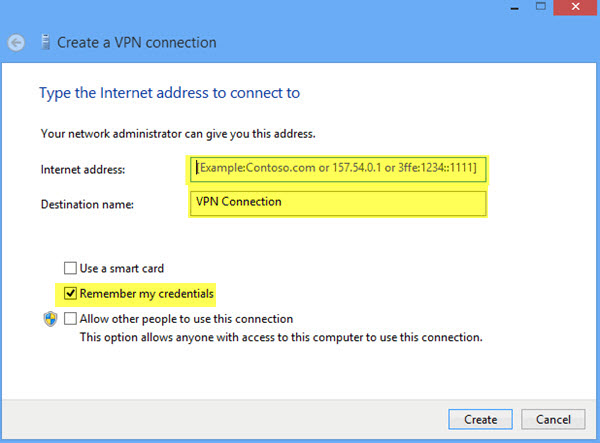 If you have followed the previous instructions, you’ll have successfully set up the connection. 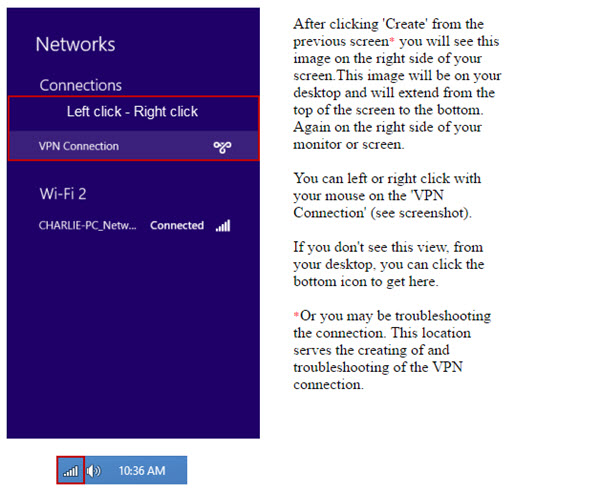 Select your newly created connection and then click Connect.

Enter your VPN Username and Password, and you are set to begin work.

The other connection protocol standard is L2TP, or the Layer Two Tunnelling Protocol, which “is an extension of the Point-to-Point Tunnelling Protocol used by an Internet service provider (ISP) in order to operate a VPN over the Internet”. It is considered a much more secure connection when it comes to VPN encryption. It’s also built into the Microsoft system and hence does not require any other kind of software.

However, it does impede speeds a little bit more than PPTP.

The process of setting up an L2TP connection is similar to the PPTP above. Follow and read read through the instructions given in steps 1-7 above, and jump back down here to setup the L2TP connection. 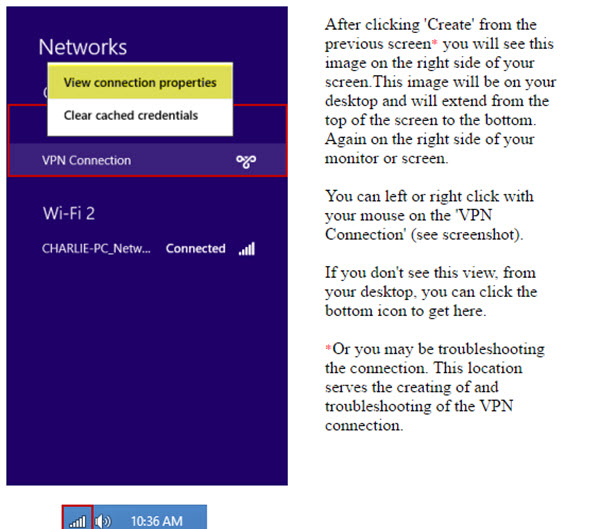 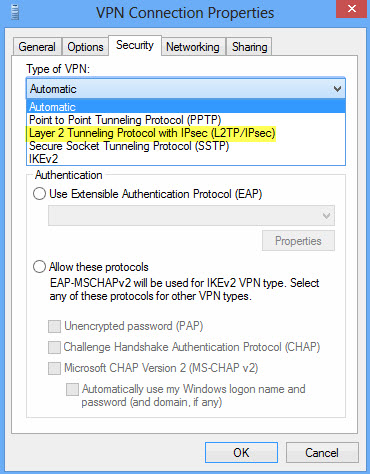 If you have decided not to upgrade to 10, getting hold of the new features of Windows 8 will probably take some time. Hopefully this guide will help you not only configure a VPN, but also more easily move around and bring up the control panel and settings menus for easy and quick operation.