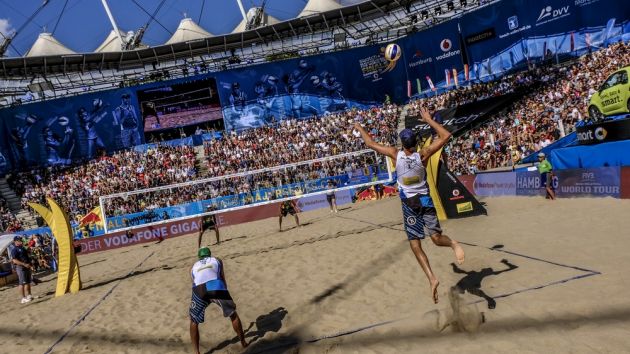 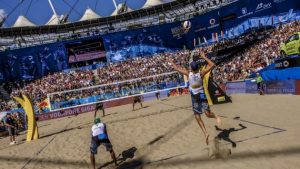 Playing or watching beach Volleyball can be a lot of fun and the sport is so popular that it has even reached places that are not exactly known for their tropical shores. For instance, one of the main international events for Volleyball fans takes place in Hamburg, Germany in the summer. The FIVB Volleyball World Championships bring top female and male players and the 2019 version is the 12th edition of this event. It is possible to watch the championships in the United States on one of the main networks in that country, NBCSN. This network offers excellent coverage, but it is only available within the United States. If you happen to travel abroad and want to get access to the US coverage, the best option is to use a VPN service.

The history of the Beach Volleyball World Championships is relatively short since the first edition took place in Los Angeles, United States in 1997. Since then, the event has been held every 2 years in different locations. Germany repeats as host in 2019, as previously the championship was held there in 2005. The most successful teams in the history of the competition are the Brazilian teams. In the men’s tournament, the Brazilians have taken the victory 7 times, while the women have won 5 times. They are ahead of the game and so far, they are the clear favorites. However, anything can happen and as Beach Volleyball is becoming more and more popular around the world, we can expect other countries to bring their best game in the coming years and become the new dominant players.

If you want to enjoy the best coverage of this thrilling championship, the best option is the NBC, but you need to have an account to be able to access this channel. If you prefer not to get tied to contracts, you can opt for a subscription service like Sling.TV. However, it is important to note that these services are only available in the United States. The good news is that there is a practical solution to overcome the geographical restrictions and enjoy access to all the content that you want and that is using a VPN service.

First you need to select a VPN provider that offers fast speeds and effective unblocking technology to give you access to the streaming services that show the championship in the United States. That way, even if you are traveling abroad, you can enjoy the matches with the best coverage. The process to sign up is pretty much the same, regardless of the VPN that you select, here are the common steps to follow:

Most VPN providers have servers in the United States, but that is not the main feature that you should look for in a VPN. When it comes to streaming sports events or other media content, it is important that you look for a service that is fast and easy to use. It should have high quality apps so that you want defeat the restrictions and watch the matches at home or on the go. Last, but not least, it should protect your internet traffic with strong encryption and it shouldn’t keep logs. Here are our recommendations.

ExpressVPN has become one of the favorite solutions for internet users all over the world who want to keep their connection protected and avoid restrictions. ExpressVPN has servers in over 90 countries, including the United States, where you can find many different options to connect to. ExpressVPN offers advanced unblocking technology that can give you access to the services that allow you to watch the Beach Volleyball World Championships. It uses high encryption and it doesn’t keep logs of your activities.

Known as a highly secure VPN service, NordVPN is another service that we highly recommend not only because it protects your internet traffic, but also because it can overcome restrictions effectively. You can connect to more than 5000 servers in over 60 countries. Of course, the United States is in this list of servers and you can easily overcome the restrictions and enjoy the best coverage of the championships from anywhere. NordVPN offers features like Tor over VPN and it is also quite fast. Since it is a zero logs provider, your privacy is protected.

Apart from being affordable, PIA is one of the most popular providers due to the fast speeds that it offers and the convenient selection of features supported. Private Internet Access enables you to get around blocks effectively and it doesn’t keep any logs that could put your privacy at risk. With Private Internet Access, you can watch the top beach volleyball players and teams in action, enjoying the best coverage in the United States. There are over 3000 servers in PIA’s network, including many options in the US.

Although Surfshark hasn’t been around in the VPN industry for as long as the other providers, it is one of the most reliable solutions that you can find at the moment. It doesn’t keep any logs that could put your privacy at risk and it uses strong encryption to keep your data secure. Surfshark has hundreds of servers in more than 60 countries and its network continues growing. You can connect as many devices as you want at the same time and the provider has been independently audited, so its security and commitment to privacy have been tested and confirmed.