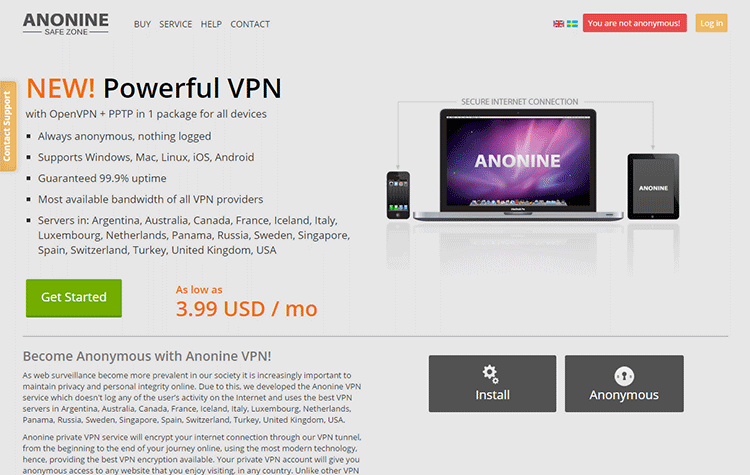 Online freedom today is a debatable issue and the VPN industry with its very glorification of the entire concept has proven to be quite an important harbinger of the same. And Anonine is one of those more competent members in the market for VPN providers. The Swedish based company embraces the need for online anonymity and access to unrestricted web content. With the rise in the number of security threats in the virtual world, the demand for a secure environment is on the rise. Armed with a competitive package and essential features, that is exactly what Anonine provides. It has been around since 2009 and uses the most modern encryption methods to keep your identity safe.

Cyber criminals have evolved throughout these years and are employing never before seen methods to compromise on online security and identity. Violation of privacy, threats to security, theft of financial details, infiltration, and many other issues are reported on a daily basis from around the globe. This is where a Virtual Private Network steps in. And among the hundreds of providers in the market, choosing one does become an tough choice. So why should you choose Anonine out of all its contemporaries that are found in the market? The review below strives to provide a few answers to your queries.

Anonine now offers great VPN software clients for all major platforms, being Windows, Mac OSX, Linux,  Android, and iOS. And to help you get acquainted with the dos and don’ts of using Anonine on your device, they have made available on their website specific tutorials for each operating system version. It doesn’t matter if you are technologically challenged because the tutorials are visual step-by-step guides with exact screenshots. 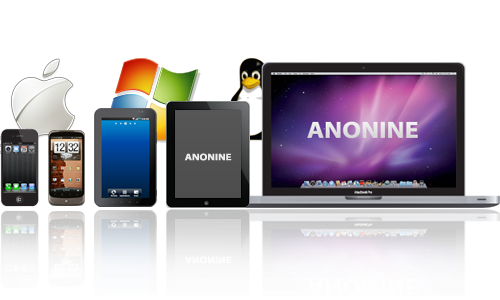 Being based in Sweden, they support special Torrent and P2P networks as well as unlimited bandwidth. Users can stream movies, download, or upload as much as needed without having to worry about a monthly limit.

Encryption is an essential feature that has to be offered by VPN providers to shield you against the vulnerabilities that are posed by security threats online. Data encryption is imperative to keep your identity anonymous and has to be designed keeping in mind the evolving manners in which cyber crimes are being committed throughout the web.

Anonine scores well on this point. It supports OpenVPN through 2048 bit encryption, as well as PPTP, SSTP, and L2TP over IPSec. They use dynamic IPs and also replenish their stock of IP addresses continuously. Plus, they do not ask for any personal information, unless the need arises. Here’s what their website has to say about it:

“As web surveillance become more prevalent in our society it is increasingly important to maintain privacy and personal integrity online. Due to this, we developed the Anonine VPN service which doesn’t log any of the user’s activity on the Internet and uses the best VPN servers” all throughout the globe. “Anonine private VPN service will encrypt your internet connection through our VPN tunnel, from the beginning to the end of your journey online, using the most modern technology, hence, providing the best VPN encryption available. Your private VPN account will give you anonymous access to any website that you enjoy visiting, in any country. Unlike other VPN services, our software can be used on multiple devices. To remain secure all you need is to log into your Anonine account and start surfing.”

At the time of its inception, Anonine just had one server based in Sweden. However, today it has spread its reach throughout 22 major countries of the globe with 80 VPN servers to provide adequate bandwidth. Available country connection points include Argentina, Australia, Canada, France, Iceland, Italy, Luxembourg, Netherlands, Panama, Russia, Sweden, Singapore, Spain, Switzerland, Turkey, United Kingdom, and the United States of America.

However, it’s interesting to note that being Swedish-based was an excellent advantage for the VPN provider, because of the rather positive amount of online freedom and security provided by protective laws. As mentioned under features, torrents and peer-2-peer networks are fully supported, and Anonine promises to provide a true a logless VPN service.

Speed wise the service did well on some server locations, but not all. Furthermore, speed tests had fluctuating results at times, but generally speaking, the performance was not terrible. No disconnections occurred, and the VPN clients passed all IP and DNS leak tests.

Anonine has simplified its plans recently to provide a monthly, 3-month, and yearly package offering at competitive rates. One account allows up to 5 simultaneous connections, enough for a household with multiple devices. 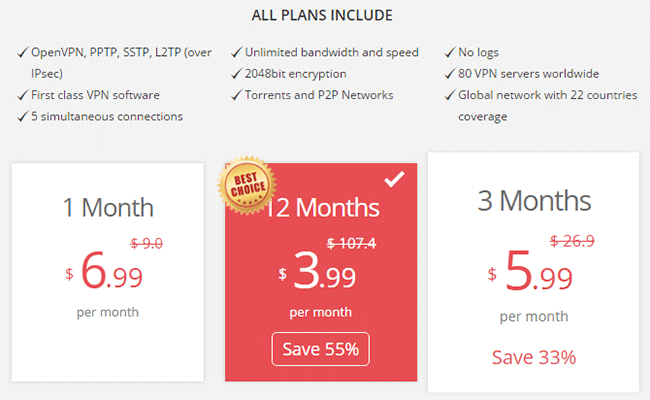 All the packages offer you the same features. However, the absence of a free trial is something that sticks out like a sore thumb. Anonine provides a few payment methods including Bitcoin and PayPal, one of the most widely trusted platforms for financial transactions.

It’s important to take into consideration how user-friendly a sophisticated technological product like a VPN is. There are various hurdles that a first timer might face while using a VPN, and in this very regard, Anonine scores a major bonus with its interactive tutorials to help customers out.

Also, all the technical complications and glitches that one might face while operating a VPN is resolved by the support provided to the users by the VPN provider. All such queries are accommodated by Anonine. They welcome dialogue and look forward to responses from their customers.

You need to provide your username and email before voicing your concern on Anonine. They also have a presence on social media platforms like Facebook and Twitter to reach out to a greater audience.

Anonine strives to uplift your anonymity in the virtual world and is successful to a great extent. Its attention to security is noteworthy especially because of the use of necessary encryption support and through point to point tunneling protocol. It upholds the need for online freedom and takes a stand against the menace of online censorship. It remains true to what it claims to be on its official website and helps you to “become anonymous with Anonine VPN”. The website itself is structured in an organised fashion and proves to be a lucid and handy guide for navigators.

However, there are few glitches here and there. It doesn’t offer a free trial in its pricing options; thus, users don’t know what they are in for. Also, the speeds aren’t extremely fancy; they are just good enough to be termed as ‘sufficient’.

However, if we try to ignore these, what we get is an immensely competent VPN provider at an affordable price and with unlimited bandwidth. It’s reliable and trustworthy and takes our concerns into account. In the long run, Anonine may truly prove to be worth the money spent!