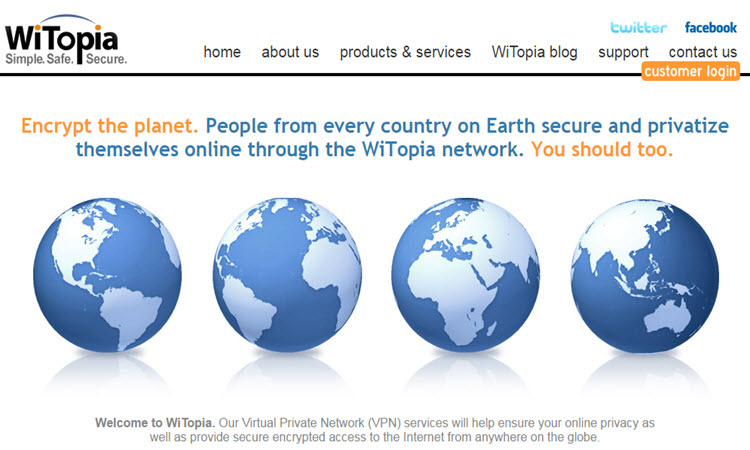 Witopia Vpn provides a good all round service

‘Simple. Safe. Secure.” – reads the tagline. Witopia, the VPN service provider which was founded in 2003 by former UUNET Managers, aims to provide an impressive VPN network which is protected from the onslaught of external influences. Originally titled ‘Full Mesh Networks’, it has found quite a few takers.

Witopia was born out of an idea that pledged to tackle the infiltration on virtual networks by unwanted hackers. The official website says so in eloquent words – “With identity theft, unsecured wi-fi, and assaults on online privacy spreading across the globe like a mutated pathogen, the folks with the greatest need for simple and powerful data security were not large businesses, but small companies and individuals. We also thought it sounded like a lot more fun.”

With endorsements and positive reviews in huge quarters like the New York Times and The Economist, there is a lot going on for Witopia. However, despite the initial brilliance displayed by it, there is quite an amount of variation in the service provided. The article that follows outlines the various aspects of its performance and what you should be looking forward to as a user.

Setting up Witopia is a quick and easy task. Just after you are done purchasing it, you just need to follow a set of instructions to set the network working. The developers have looked into the fact that the process is easy and smooth, without any complications.

It boasts a huge list of compatible operating systems. All the major ones like Windows XP, Vista, Windows 7, Windows 8, Mac OSX, Linux are covered, including iOS and Android platforms. Surprisingly enough, the ones that are ignored like Google Chromebook and Kindle Fire HD are also included in the list of supported platforms.

A shout out to the fact that they do not come with any bandwidth limitations, and they haven’t yet had to limit the bandwidth of any customer. There are options for 256-bit encryptions.

Coming to the money back guarantee! They say it rather frankly on their official website – “Although some have been shamed into matching our offer over the years (we’d still read their fine print if we were you) ;-), we find we’re still mostly alone in offering this. We don’t want ever to force someone to be our customer that doesn’t want to be. That’s just weird.”

They come with a 30-day long money back guarantee, which they adhere by religiously (unless the customer violates something that is mentioned under the ‘Terms of Service’).

They have a free and secure DNS service which ensures maximum performance and security while using their services.

It is commendable that Witopia considers customer support to be of immense importance and has a 24×7 helpline that looks into the needs of the customers throughout the year.

The importance that they asserted to customer service is obviously visible in the layout of their official website. There is an online chat link, where you can paste your query whenever you want to. It is meticulous and responds quite quickly. Moreover, the ‘Contact’ page on the website provides some emails that one can reach out to in case one need some support.

Witopia has a lot going for it – the 24 x 7 customer support for 365 days of the year, the beautifully designed website that doesn’t hide any detail from the customer, the reach of its services, the affordability of the subscriptions, and the availability offered on various kinds of Operating Systems. All these make it worth a try!