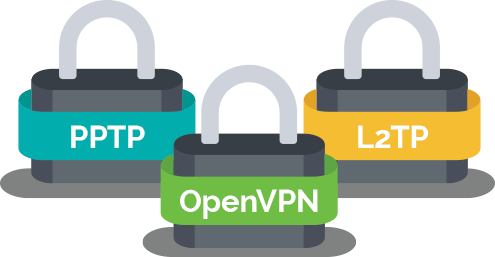 There are different protocols available and they suit different requirements, but it is important to know which option is the right one for every case. You may be looking for a solution that offers the best level of security, or for one that is fast. The truth is that you will need to decide what is the most important aspect for you since there is not an option that works for every single case. Choosing the best protocol available is a challenge since the answer depends on what you are looking for. The VPN protocols available are designed to suit different needs so once you know what is the most important aspect for you, you will be able to choose an option that is ideal for you. Let’s take a look a each of the protocols available and what they offer.

PPTP has been around for quite a while and although this may make it appear as a reliable solution, it is important to note that it also means that it is outdated. It is supported by almost every VPN and one of its main advantages is that it is very easy to set up. PPTP is also known for being a fast solution, but it comes with a major downside and that is that it is no longer secure. It is likely that it has been already compromised by the NSA and it has known security vulnerabilities, meaning that when you use this protocol, your data is likely to be accessed by others.

L2TP on its own is not a secure solution, but when it is used along IPSec encryption it becomes a good option to protect the security and privacy of your connection. The majority of VPNs and operating systems feature L2TP/IPSec and this protocol is considered as a fairly secure option. In addition, it is easy to set up and if you use a VPN connection, manual set up is not required. Another advantage of L2TP/IPSec is that compared to other protocols like OpenVPN, it is fast. The problem is that it is thought that this protocol has also been broken by the NSA, or at least, weakened. Furthermore, in many cases, this protocol is not the most effective solution to bypass firewalls.

OpenVPN is relatively new, but it has become the preferred choice for users who are concerned about privacy. It uses the OpenSSL library in combination with SSLv3/TLSv1 protocols. The security of OpenVPN is increased when used with AES-256 and many providers offer this option at the moment. The speed of OpenVPN depends on the level of encryption that is applied. One of the benefits of using OpenVPN is that it can be set up on almost anythings and it is very secure. It is also worth noting that it has no issues bypassing firewalls. OpenVPN uses a different encryption algorithms, which gives you flexibility. On the other hand, the configuration is more difficult than in other cases and it requires third-party software, which can leave your device vulnerable to possible issues such as malware or viruses. The good news is that if you use OpenVPN with a reliable VPN service, there should be no problem as the setting should be easier and you won’t need to worry about security threats.

Since this protocol is largely associated to Microsoft, many people don’t see it as a trustworthy solution, considering the fact that Microsoft is known for cooperating with the NSA. If privacy is your main concern, you may prefer to stay away from this protocol. Still, it comes with some benefits, including the fact that it integrates easily into a variety of devices. It can also bypass the majority of firewalls and it can be convenient since it comes supported by Microsoft. If you don’t mind the privacy concerns surrounding SSTP, you may find it to be a very stable solution.

Based on the IPSec technology, this protocol is the result of a collaboration between Microsoft and Cisco. It stands out thanks to the fact that it can reestablish a VPN connection when the internet connection has dropped. It is a convenient solution for mobile devices and it offers fast performance. IKEv2 is easy to set up and it uses a wide range of secure ciphers. However, the fact that it was developed by two large companies may raise some concerns.

Which is the fastest option?

Speed is one of the main aspects that users consider when it comes to VPN protocols. After all, dealing with a slow connection can be frustrating. Fast performance is specially important when it comes to streaming or gaming. If you are wondering which is the best protocol in terms of speed, the simple answer is PPTP, but it should be noted that this is due to the basic encryption that it provides. If you opt for PPTP, you would be sacrificing security in order to get speed. As previously mentioned, it is likely that the NSA has already compromised this protocol. While PPTP is the default VPN protocol in many cases and it works well with most platforms and devices, it is not a secure solution.

IKEv2 may be the fastest solution for mobile devices, but it works better for Blackberry and Windows Phone users. Although L2TP/IpSec is slower than PPTP, it offers a better level of security so it would be a good alternative is you want to combine speed and security. OpenVPN provides better security, but if it is used with high encryption it is set to be significantly slower.

What is the most secure protocol?

Security is the most important aspect for many users and since there are so many threats lurking on the internet, it is important to find the necessary tools to protect yourself. Encryption is a powerful weapon to enhance your online security, but in order to enjoy its benefits, you need to check how strong is the encryption used by the protocols available. OpenVPN is widely considered as the most secure VPN available and when it uses 256-bit encryption, the data is authenticated with digital certificates and it offers an integrated solution for users who prioritize privacy.

OpenVPN is known for its reliability and stability and it is compatible with most operating systems. L2TP/IPSec is another solution that offers strong encryption and while it may be slower than other protocols, it stands out thanks to the fact that it checks data integrity and it offers encryption twice. It is available in the majority of cases.

Which is the easiest protocol to use?

Speed and security are key factors to keep in mind, but ease of use should also be considered. This is what will ensure that you can get the most out of the protocol and that you won’t have any hassle. If you are looking for the protocol that offers the easiest setup, PPTP would be the top choice, although as previously mentioned, it is not the most secure one. If you don’t require strong encryption, PPTP may be the most convenient solution. While OpenVPN is very secure, it can also be difficult to set up, specially when it is not native to the operating system or device that you are using. PPTP is great for beginners and those without advanced technical skills. PPTP/IPSec is a good alternative for those who want an option that is not too difficult to set up and that provides a decent level of security and acceptable speeds.