In reference to the San Bernardino open firing in which a U.S. Federal Judge had pronounce a verdict in favour of the FBI and asked Apple to help the FBI in way possible, to search for any links that the accused killed in the shooting may have with terrorist organisations by breaking through the tough encryption of Apple’s operating system that prevented the FBI from accessing the information on Syed Farook’s phone.

Tim Cook, in a letter released soon after, vowed to fight the court verdict which he thought impaired the right to privacy of many of its users.

And Google wasn’t a company to be left behind. Joining voices with Apple, Sundar Pichai recently offered some support to the company through a tweet that said:

“We know that law enforcement and intelligence agencies face significant challenges in protecting the public against crime and terrorism. We build secure products to keep your information safe and we give law enforcement access to data based on valid legal orders.”

Calling it an important stance taken by Tim Cook, he said that forcing companies to alter their security systems and thus enable hacking, could “compromise users’ privacy”. 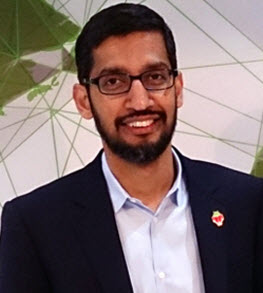 He seemed to be echoing most of Cook’s intentions, which revealed that Apple would readily make its engineers available to help in the best way possible. However, to completely enable the hacking of its operating systems is something unacceptable, or as Pichai said, a “troubling precedent”.

Although Cook has earlier been critical of Google not taking security issues as seriously as it could have – or, as Apple does. Calling a person’s right to privacy, as ‘an issue of morality’, Tim Cook has always stood up for it.

Hence, it’s quite evident why Google subtly voiced its support for Apple, and not as vocally and directly as it could have, which could have been quite odd.

In its case against Apple, the FBI was trying to dig up a law that dates back to as early as 1789 – called the ‘All Writs Act’, it demands Apple alter its security settings to make it easier for the FBI to access the terrorist’s phone. Although this debate of right to privacy against law enforcement, can give out a wrong message of Apple placing a terrorist’s privacy ahead of national security. But, with Google lending a hand to Apple, albeit subtly, can take this a long way.

So, all that’s left to see is whether Microsoft too joins the side of these giants. What say, Mr. Satya Nadella?