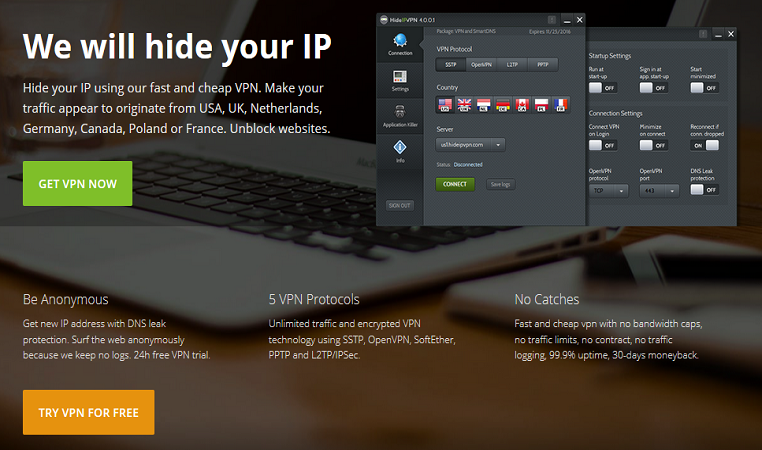 HideIPVPN is a great VPN service for users who want an inexpensive alternative to some of the costlier services without paying for extra bells and whistles that they may not ever use. They have a very solid and streamlined service with adequate connections, though they don’t have servers in as many countries as most of their competitors. To date they have servers in USA, UK, Netherlands, Germany, Canada, Poland, and France – making them a good fit for American and European users. But as time moves forward, we expect them to expand their global coverage options and add more servers to their network. One thing they do a little differently than the competition is to include Smart DNS and proxy services for free when users opt for a VPN subscription, giving users that much more flexibility when needing an online anonymity solution.

HideIPVPN has an interesting pricing model because they seem to add in their Smart DNS and proxy service features for free. Users should note that they are certainly one of the more favorably priced VPN services, and their service can be purchased for as little as $4.16 per month with a 1-year subscription. For those of you who want a monthly subscription, the rate starts at only $5.99, which isn’t too bad considering the extra Smart DNS and proxy services you get in the bundle.

Users also have the option of only purchasing the Smart DNS and proxy service for $4.95 per month. Although, we wouldn’t recommend that users do this. For only $1.00 more per month, users can take advantage of the added security benefits of a VPN tunnel. Please note that Smart DNS doesn’t, by itself, provide encryption or security. It really only serves as a proxy service to help unlock geo-restricted and gated content. Getting the VPN service really has a lot more value than only the Smart DNS and proxy service.

It really is quite astounding how many operating systems HideIPVPN supports. They support older versions of Windows dating back to Windows XP, and support every later version in addition to OS X, iPhone, iPad, Android, Chromebook, DD-WRT, and Linux. Users will also like the chance to test out the service with a free trial, but there are a few caveats. Oddly enough, they only let users take advantage of the free trial for 24 hours, but one advantage of the free trial is that you aren’t required to enter payment card data. You can also test drive their Smart DNS service for free, and they have a 30-day money back guarantee to give you even more time to test out their VPN tunnels.

Furthermore, they offer a wealth of different connection options – just about every consumer-grade connection protocol under the sun including OpenVPN, SSTP, L2TP, PPTP, and SoftEther. So on the encryption technology front, they’ve got everything locked down. Digging a little deeper, however, there are a few points to their terms of use policy that were subpar.

Chiefly among their policy disadvantages is the reserved right to request identifying documentation if they think users are suspicious or up to illicit activities as described on their policy page: “HideIPVPN may request proofs of your identity (card ID, driver license, etc.) if the order looks suspicious or if it is made from a high risk country. The refuse to send the required documents will result in termination of your account, without any refund of amounts previously paid for this service.”

The whole point of VPN services is anonymity, and I wouldn’t want to send them a driver’s license or other similar information. Ever. They also waffle out of liability constraints, which makes me wonder how confident they are in their service when they make the following statement: “However, we cannot guarantee that the information submitted to, maintained on, or transmitted from our systems will be completely secure.”

As far as the stability of their network is concerned, HideIPVPN has a 99.9% uptime guarantee for their network, as we would expect from and IT services company. And their speed is fair – not the slowest on the market but certainly not the fastest. A few users have reported inconsistent speeds across some of their servers, but this is most likely due to peak usage hours and capacity constraints. By and large, their speeds are more than fast enough to facilitate regular web browsing and even more intensive applications such as streaming video and audio. However, because of the inconsistent speeds reported by users, gamers who need lightning fast connections may want to opt for another service.

HideIPVPN’s customer support is more than adequate, and they offer timely responses from a web-based live chat system. Professional support representatives are standing by 24/7 to help users, and they are both professional and competent. The best part is that they can even help users with remote configurations if they run into any technical problems, using TeamViewer to view the user’s desktop and make the necessary configurations. However, some users that would prefer a phone call might be disappointed. But I view the live chat system as an improvement over outdated customer support call-queues. The live chat system is faster and you don’t have to listen to annoying music while you’re on hold.

Please note, however, that despite these two drawbacks, they do have a nice no-logging policy. They will never keep logs of user activity or track browsing behaviors of their users. Instead, they only collect metadata such as login/logout times of various accounts to keep an eye on server capacity and network performance.