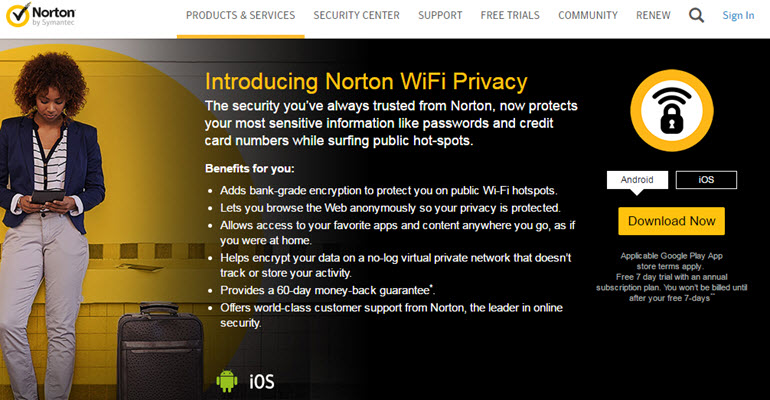 Norton has released a new mobile VPN, which signifies the push by Norton to establish itself in the mobile department as a security stronghold. The security company released a new VPN service for mobile devices. However, the VPN is not for use to stop torrents, or access any of the overseas content or the Netflix catalog. The company just wants to help you when it comes to the public Wifi and wants to help you stay safe on it.

The company just announced the launch of their Norton Wifi privacy, which is going to be a subscription-based app that would help users in encrypting all the data they receive and send. Through the use of the public Wifi network VPN, users will be able to encrypt their activities on the Internet from social media logging into the Internet banking details that they provide and also the shared photos and videos they have. The new VPN from Norton is already available on the market globally and can be accessed on the Apple and Android markets right now.

The security firm is also concerned with the security of its users that it has given out a dedicated Wifi Risk Report which was also part of the launch. The Report surveyed users of the Internet in the nine different countries. The report covered how much we care about our own privacy and the results are enlightening. The report shows that at least 57 percent of the people surveyed showed that they believed that their information was already safe when using public Wifi network. Only 35 percent of the people surveyed could tell the difference between the secure and unsecured networks they received.

Clearly, the company is trying to save ourselves from our ignorance. The new security app is a mobile VPN at heart.

Here are some of its characteristic

Low latency when connecting to the services is also being promised all on the basis that there are various server locations globally. The encryption keys for each and every single connection are changed, so there is no data log. It’s more than just secure Wifi Internet connection, and at prices such as $30 per device per year, it is just as good.

The company is also expecting to see its brand help to win some customers for themselves. Norton Director for the Pacific region, Mark Gorrie said that there were a lot of VPNs available on the market, and there were a lot of unknowns. Therefore their introduction as a trusted brand would work in their favor.