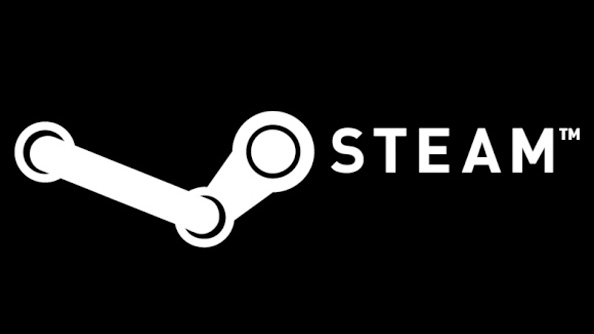 Hackers are continuing to hack into gaming sites – but they aren’t playing any games.

Online gaming platform Steam was hacked around the time of its holiday sale with a Distributed Denial of Service attack (DDoS), and responded with some measures of its own: a web caching service that would mitigate the 2,000% web traffic increase the DDoS attack created. The result? Cached Web pages started being visible to other Steam customers on the most wonderful day of the year (Christmas Day). So, in some cases, one Steam customer could see the credit card number of another Steam customer as well as his or her personal information. Steam customer @Steam Spy wrote on his Twitter account, “I can confirm that: Steam gave me access to another person’s account with credit card info and purchase history,” with a picture of the other person’s account below (personal info blotted out). Other members responded that they were seeing the same page and that someone had added an additional $100 to his account during the time they were on Twitter discussing the data breach. 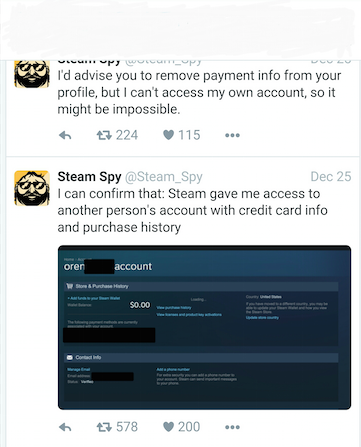 Steam customer Joshua Caleb wrote in response to Steam Spy, “I’m getting a different user depending on which game page I’m viewing,” while Stacey Borg wrote, “I’m seeing three different accounts, one each for account home, purchase history and license/prod key activations.” Liza Sabater said that she’d get a new customer each time she refreshed the Steam account page.

Steam responded to all of this after it cleared up the situation by saying that it was the result of a web caching defense to better handle the DDoS web traffic increase:

“On December 25th, a configuration error resulted in some users seeing Steam Store pages generated for other users. Between 11:50PST and 13:20 PST store page requests for about 34K users, which contained sensitive personal information, may have been returned and seen by other users.

The content of these requests varied by page, but some pages included a Steam user’s billing address, the last four digits of their Steam Guard phone number, their purchase history, the last two digits of their credit card number, and/or their email address. These cached requests did not include full credit card numbers, their passwords, or enough data to allow logging in as or completing a transaction as another user…

Early Christmas morning (Pacific Standard Time), the Steam Store was the target of a DoS attack which prevented the serving of store pages to users. Attacks against the Steam Store, and Steam in general, are a regular occurrence that Valve handles both directly and with the help of partner companies, and typically do not impact Steam users.

In response to this specific attack, caching rules managed by a Steam web caching partner were deployed in order to both minimize the impact on Steam Store servers and continue to route legitimate user traffic. During the second wave of this attack, a second caching configuration was deployed that incorrectly cached web traffic for authenticated users. This configuration error resulted in some users seeing Steam Store responses which were generated for other users. Incorrect Store responses varied from users seeing the front page of the Store displayed in the wrong language, to seeing the account page of another user.”

Steam used web caching to fight back against the massive traffic overflow it received, but the web caching service made the situation worse. It’s a sad day when hackers can take down any site they please, but it’s even worse when defensive responses expose personal data of customers to other customers.

Even at the start of 2016, hackers are playing no games – even if you are when they hack into your account.