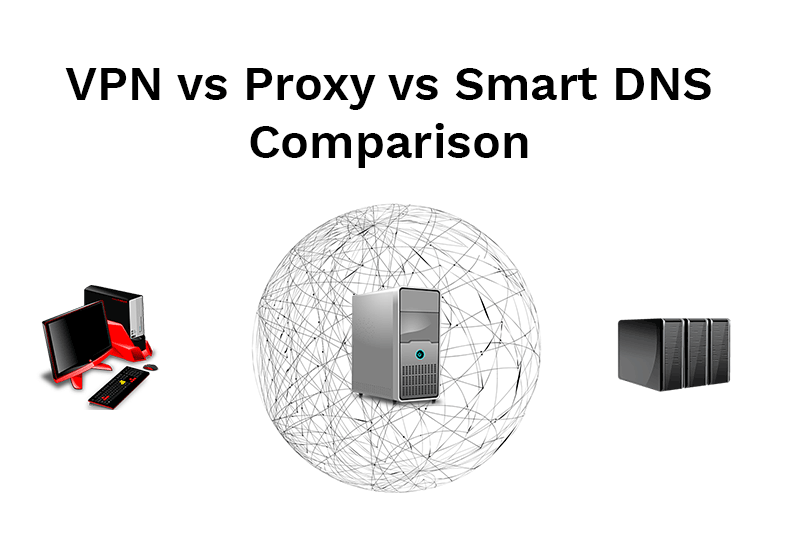 Many beginners get confused when comparing proxy servers and VPNs for the purpose of masking or changing one’s IP. Both can be used to bypass geo-restrictions on content and websites from countries where services are blocked. Therefore, the two are sometimes misidentified as being the same.

VPNs and proxies are similar in that they both allow the user to hide their IP address and make it look like they are accessing the internet from another location. The main difference though, lies in the fact that proxies do not encrypt the data, while VPN servers add a layer of security with end-to-end encryption of your web traffic.

Nowadays, you also have Smart DNS services that provide a similar solution to unblock geographically restricted content. But unlike proxies, which act as an in-between computer, only change DNS queries in order to trick websites into thinking your query is coming from another country. Simply put, a Smart DNS is a DNS only proxy server that serves in place of your computer’s default DNS.

Which Option Should You Choose?

In summary, there are important aspects to each service that should be considered:

So which one is best? In our opinion, a VPN is a far superior option. In comparison to the other two, a VPN provides unmatched security, privacy, and performance.

But of course, there are some important security concerns to take into account when using any of these services:

When using a VPN service, if the privacy of your data is important, choosing a reputable and trustworthy provider is a must.  Although a VPN service promises to encrypt all your web traffic, it is imperative that they do not log the data. This would allow for the possibly of them being able to decrypt it.

It’s usually not a concern though, since companies charge for these types of services, and wish to retain a good name in the industry. However, keep in mind that there is no such thing as a free VPN with no restrictions. If it’s too good to be true, your data might be at risk. A much better option is to invest in a cheaper service with no limitations.

Proxies only provide a layer of anonymity between you and the websites you visit, but they don’t do as good a job as VPN servers do. In fact, it is extremely easy for website servers to detect that you’re using a proxy. In the case where the proxy is not properly anonymized, the sites can also trace your real IP address. However, the real security concern comes from passing all your traffic through this proxy.

Since it is not encrypted, not only can your ISP still see your traffic, so can the proxy for as long as you’re connected to it. Therefore, using a free or public proxy server can pose a security risk. Your data may be logged and sold to third parties without your consent or knowledge.

Additionally, there are different types of proxy protocols, and picking one with the right security is imperative. Further down, the different proxy types are outlined and explained. Although there are paid proxy services, it seems like a no-brainer to opt for a superior VPN service instead, since the data remains encrypted and hidden from the service provider as well.

Unlike VPNs and Proxies, Smart DNS does not change or mask your IP address, nor does it encrypt any of the traffic. It provides a much lighter solution to bypassing geo-blocking. When necessary, Smart DNS servers are used to make it appear as if the website request is coming from another country.

For example, if you want to access a United Kingdom site from Canada, the Smart DNS will trick the UK website in thinking the request is coming locally, allowing you to access content that would otherwise be blocked. However, it does not provide any security or privacy.

I highly advise to never utilize free Smart DNS services, because they can essentially be used as DNS hijacking tools by malicious attackers. There are some good paid services that make a great alternative option to VPNs for unblocking streaming sites. But because Smart DNS servers routinely get blocked as often as VPNs do, unless the cost difference is large, I always prefer a VPN service with multiple servers.

Another thing to consider is that a few VPN services also provide combined Smart DNS with their plans.

As you may already know, the types of proxy and VPN servers discussed on this article are considered consumer level products. They provide a solution for individuals and businesses to encrypt their web traffic, or bypass geo-fencing by masking and changing IP location sources. However, VPN and proxy servers have been used for many years now, just in different ways and for different purposes.

Historically, proxy servers are said to have been created shortly after networks and the internet. They have been present almost since the beginning of online inter-connective networking. Virtual Private Networks on the other hand have been around for 20 years or so, and were initially used by corporations to create private and securely encrypted connection tunnels to company servers.

Over the decades, both server types have drastically improved in performance and application use. Today, when we speak of ‘consumer’ level proxy and VPN services, they differ from web protocols, or professional corporate needs in some ways, but generally utilize the same technology. Below is a more detailed outline of these services, and the different categories or security levels available.

Proxy servers allow you to mask your IP address by acting as a man-in-the-middle computer, and displaying its’ own IP address instead. If you connect to a proxy server in the United States, it will make it appear as if you are accessing the internet from the US, no matter where you are actually are. The intermediary computer between your system and the internet acts as a relay, making the requests and sending the data back to you. Therefore, all activity from your system seems to be coming from that remote computer to websites, but your ISP can still see your traffic.

However, proxy servers only act as mediators. They do nothing to secure your connection from different attack vectors or tracking agents. They might be free to use, but they are definitely not secure. There are a few different types of proxy servers:

HTTP proxy servers are the simplest and oldest of the bunch. They can help you connect to addresses that have an http or an https in the address, or basically all web pages. All other traffic is unreachable when you are using an HTTP proxy.

The issue is that it only uses an HTTP forwarder to mask your real location, and this can easily be thwarted by website servers. Not only can they detect your proxy, the website will easily be able to trace your real IP address. While their limitation of internet traffic and security is a problem, it does not affect bandwidth speeds.

SOCKS proxy servers handle any type of traffic. Additionally, they qualify as a private proxy. It was created to improve security on HTTP proxies, which were open to data packet sniffing. This type of proxy is also a firewall. The client blocks any unauthorized connections, and effectively keeps your device and IP private from any external data requests.

SOCKS5 is the latest and most advanced version. It utilizes user authentication and fully supports TCP and UDP traffic, making it ideal for downloading and streaming.

Web proxies are services that connect you to a public HTTP server, allowing you to browse the internet from within your browser while being anonymous. They are free to use and do not require the installation of any software or any other configuration. However, they face problems when they encounter JavaScript or Flash content. They can also flood you browser with advertisements or collect your data without consent.

Additionally, since many web proxies are known to popular sites, they regularly end up blocked. Web proxy services cannot be considered secure, and have often been found to hijack DNS servers and re-route you to malicious websites.

Private Proxies are limited to only those who subscribe to them and are not open to the public. Providers offer both SOCKS and HTTP proxies to their users and are usually much more reliable than other kinds of proxies. A small fee might be charged for using them, but it’s essential to having a trustworthy service. Private proxies have generally been used by businesses to restrict access to online servers and websites to employees.

The proxy can also be used to authorize users, and make certain resources accessible.

Public proxies provide both HTTP and SOCKS servers to users for free. However, the high user load takes a toll on the connection speed, and the connection drop frequency increases as well. Moreover, there is always a risk of the owner of the servers being malicious. Just like web proxies, public proxies can be logging your traffic and selling it to third parties. There is also the same risk of your DNS responses being hijacked and re-routed to malicious or phishing websites.

VPNs offer the service of hiding a user’s IP address and making it appear to be accessing the internet from somewhere else. However, VPNs also encrypt all of your traffic. The encryption happens end-to-end, starting from your computer all the way back. This means that nobody can see what you are doing while you are connected to a VPN, not even your ISP. This adds a layer of security to your connection from various attacks, and often includes ad-blocking, and malicious code blocking when browsing.

The added encryption works better for unlocking geographically restricted services, and often provides more servers to use when some get blocked.

Yet the encryption overhead can take a toll on connection speed, especially if the servers are located far away from your actual location. However, a good VPN service usually has minimal speed loss. A trustworthy service is always a paid service. There is no way a company can provide encrypted infrastructure all over the world at no cost. Just like proxies, if it’s free, you have to ask yourself how they keep it afloat and make a profit.

Choosing the right VPN protocol is also an important issue. Sometime in the mid 90’s, Microsoft released their PPTP encrypted VPN protocol. Although very good at the time, nowadays it should be avoided whenever possible. It no longer provides secure and dependable encryption, and usually provides poor stability compared to newer options.

OpenVPN should always be your protocol of choice. The open source protocol has the ability to handle better AES encryption chains and handshakes, as well as superior stability with less disconnections or interruptions. L2TP/IPSec, as well as some other OpenVPN based protocols make good options.

By default, almost all VPN services have all the popular protocols available.

There is not much to say about Smart DNS services. They simply alternate your DNS servers to different countries in order to unblock websites for you. They work similarly to VPNs and proxies in that sense only. There is no encryption, or IP masking. It does not serve as an intermediary relay of your IP address location.

In theory, they should cost less than VPN services, but often come in at similar rates. This makes them less appealing to the informed consumer, but if you find a good deal from a trustworthy service, than why not?

Althoughwe covered lots of information regarding VPNs, Proxy, and Smart DNS servers, there is a ton of data on these topics. There are dozens more applicable protocols that aren’t necessarily consumer level.

However, as far as unblocking websites, and privatizing your online data, we hope we were able to provide a simple and understandable overview comparison between the services. If you’d like more information, then don’t hesitate to post a comment below.