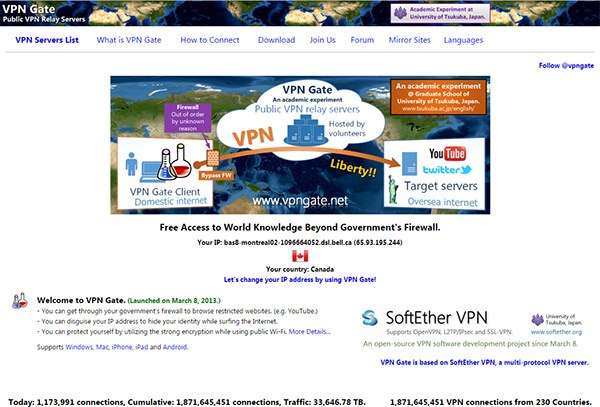 VPN Gate is a non-profit project developed by the University of Tsukuba in Japan that is mainly run by volunteers. While it works as a VPN service that enables users to change their IP address in order to access websites/applications that are not available in their location, the main purpose of the site is academic research with the aim of expanding the knowledge about “Global Distributed VPN Relay Servers”. VPN Gate is an extended plug-in of SoftEther VPN, which is an open source multiprotocol software that was also created by the University of Tsukuba.

VPN Gate was launched in March 2013 and it offers a service that is completely free of charge. It uses a network of VPN relay servers located across the world and that are hosted by volunteers. The fact that the service depends on volunteers makes it less reliable than commercial VPN options. However, VPN Gate offers a good alternative, particularly for users in Asia. To find out more about this project, let’s take a look at some of VPN Gate’s most important aspects.

VPN Gate offers a convenient solution to bypass internet censorship or geo-location restrictions, protect your privacy while you browse internet and to ensure that your connection is secure when you are using Wi-Fi hotspots. These are the usual features that you expect from a VPN provider but with VPN Gate, you can enjoy the same functionality for free.

In terms of security, VPN Gate offers 256-bit AES encryption with RSA 4096-bit key encryption and HSA-1 hashing, although some server operators may choose other ciphers. It is important to keep in mind that they keep connection logs for at least three months. While they do not monitor online browsing and usage logs are not kept, the connection data that they hold would be handed over to authorities if they are required to do so. The information is transmitted to VPN Gate from every server volunteer, which can choose for how long they want to keep these logs.

Taking this into consideration, it is important to understand that VPN Gate should be only used as a tool to avoid censorship and to protect your connection while you are using a public Wi-Fi connection. If you are looking for VPN service that allows you to hide your identity effectively, Tor may be a more suitable choice. While P2P torrent downloading is technically allowed by the VPN Gate system, some node operators may block this option.

Keep in mind that if you connect to a server where P2P downloading is not legal, the node volunteer is likely to get DMCA notices and would probably hand over your IP address details. As such, VPN Gate may not be the best option for torrenting, although there may be no issues if you download using servers where it is not illegal.

VPN Gate offers Windows compatibility through the SoftEther VPN client used in combination with VPN Gate Plugin. OpenVPN, SSTP and L2T/IPsec are supported. Configuration is easy as all that users need to do is to download the software, unzip it and install it. OSX, iOS and Android users can also connect to the VPN Gate network using OpenVPN and L2TP/IPsec protocols.

Since VPN Gate aims to provide an anti-censorship tool for users whose internet access is limited by the government, some firewalls in countries like China, Iran and North Korea block access to the VPN Gate website. To overcome this, there are mirror sites available and in case a known VPN Gate server is blocked, users can sign up for daily notifications that provide the mirror URL list.

There is an extensive selection of servers available but since the network depends on volunteers providing the service, the locations may vary. Most servers are located in Japan and South Korea but there are also options in United States, France, United Kingdom, Indonesia, Palestine, Russia, Singapore, Argentina and Australia. The speed and performance is not consistent given that each server is run by a volunteer, which also makes the service less reliable than a paid service as previously mentioned. Servers would not be available continuously because their availability is subject to the support of volunteers. 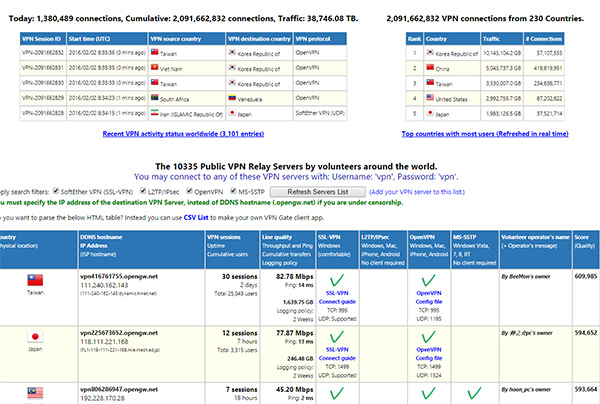 The main advantage of VPN Gate is that it is a free service and the fact that it is a volunteer effort also deserves recognition. With certain servers, you can enjoy a good speed and performance and while they keep connection logs, your browsing activity is not tracked. The project is committed to giving users the chance to avoid censorship and to evade government firewalls. The main issue with VPN Gate is that since the servers are hosted by volunteers, they go offline regularly. It may not be a suitable choice for users interested in P2P downloading and due to the fact that IP and connection details may be handed over, it also is not the best solution for whistle-blowers. Still, VPN Gate an interesting option that shows that many users across the world are willing to help others to access internet freely.