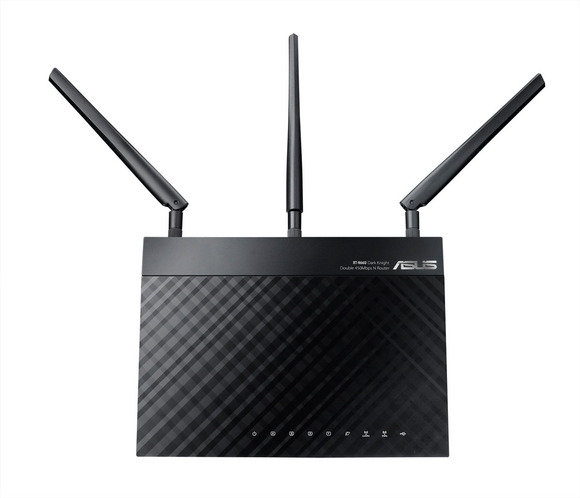 Asus is known for providing high quality devices and their routers are among the best available. They have a large selection of models including the RT-N66U, which we’ll review here. This router comes with 3 external antennas, wireless data rate of N900 (450+450Mbps) and 256 MB RAM MB Flash of memory. The processor speed is 600MHz and the wireless standards IEE 802.11 a/ b/g/n. It has a dual frequency and can broadcast on 2.4 GHz, as well as 5 GHz simultaneously. In general, it is faster than its predecessor, the RT-AC66U.

While the speed of your internet connection is determined by your broadband, this router enables you to shuffle files in your network with remarkable speed. If your broadband supports top speeds, you can enjoy a faster performance with the RT-N66U. The router boasts two USB ports and allows you to connect hard drives such as NAS, Network Attached storage devices, ensuring that all the users in your home or office network get access to a large selection of files within the router’s range. A printer can also be attached and shared wirelessly across the network.

The RT-N66U looks just like the AC66U and features three removable antennas which allow it to provide optimal coverage. The minor downside is that the antennas don’t match the appearance of the router but most users can get over this. It is also important to keep in mind that in order to get the best possible coverage, you will need to adjust the antennas, as well as the network settings. The network speeds also depend on different factors and on your location. However, the default settings would suit most users and if needed, you can easily accommodate the router vertically, with the help of the stand provided or simply placing it against the wall.

If you get your router from Sabai Technology, it will come with the Sabai OS, which is based on Tomato and designed to suit VPN usage. Sabai also offer useful set up guides and professional support to address any issues. Thanks to their exclusive Gateways technology, you can connect some devices to the VPN, while others can use the standard connection.

The setting up process is generally simple, but it is advisable that the security settings are changed as soon as possible. The best option is to keep the 2.4GHz and the 5GHz running separately because this will allow you to reduce the interference and get better speeds.

Since the RT-N66U is a dual router, it can be used to run two separate networks. Just keep in mind that you will need to setup names and passwords for the two networks running it of the same device.

When you initially get the router and connect it directly to your modem, you shoudl be able to use the two frequencies supported (2.4GHz abd 5GHz), using all the speed that your ISP offers. This performance can be expected when you get the router out of teh box and start using it.

Sabai Technology provides a simple guide with three steps to set up OpenVPN. While this makes things easier than using DD-WRT or Stock, the downside is that this would give you less flexibility in terms of the VPN provider that you can use. It is also possible to set up PPTP, but since this protocol doesn’t provide a good level of security, it is not a recommended option. Unfortunately, it is not possible to set up L2TP on the router. Although L2TP is not as secure as OpenVPN, it is better than PPTP and is an option that many users prefer.

To test the performance of the router with the VPN, we connected using IPVanish and used Sabai OS, as well as the Stock firmware. While the speed is less than the one obtained running the VPN on the PC directly, you can still get fast performance, particularly with Sabai. Since the speeds will vary specially on the CPU of your router, it is important to opt for the fastest router that you can get.

Overall, the N66U doesn’t reach the same level of quality that the AC66U offers. However, it is a more affordable option and it also supports good speeds. You would hardly notice a difference if you only have a few AC devices. The best option is to use Sabai OS on this router as it can provide better speeds for VPN.